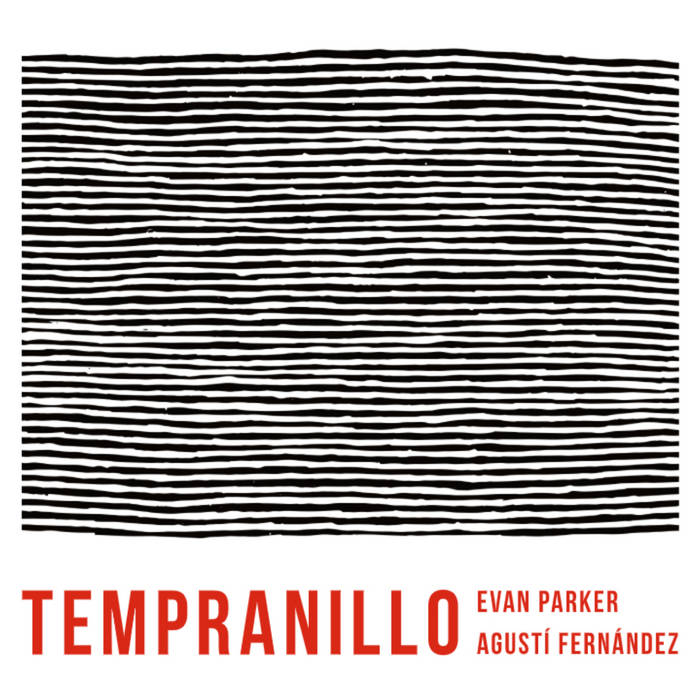 Reedition of the first meeting between Evan Parker and Agusti Fernandez.
Original liner note:
In music everything is possible, especially when dealing with musics that tend in a natural way towards improvisation or that spontaneously come from it. And improvisation is a synonymous of a constant surprise.
Surprise must never be understood as doing something in order to surprise the one who is facing us (both an audience or other musicians) because it would then mean another kind of surprise. The first one to be surprised has to be the musician even if he or she knows his or her possibilities very well (otherwise we would be speaking again about the other surprise and, as a consequence, about another kind of music) and immediately after the audience (or the rest of the musicians) will be - or not - surprised. From then on, in this shared surprise, the musician can do whatever because, by closing/completing the small circle, everything is possible when the surprise includes sincerity with oneself and with the others.
So, everything is possible when a piano and a saxophone meet almost by chance accompanied with a couple of glasses of wine (100% “Tempranillo”, or not, since other mixtures with Cabernet Sauvignon, Merlot or Pinot Noir can be tasted with the same reverence and can generate similar or still stronger surprises).
Sparks appear spontaneously from a glance, from a word, from a movement or from a musical sequence performed more with the heart that with the brain or with the instrument as such. And it is this spark the one able to light everything and to make a single meeting become a big amount of surprises, an absence of prejudices (in the most literal sense of the term).
When Agustí Fernández (Palma de Mallorca, 1954) and Evan Parker (Bristol, 1944) entered the studio in Barcelona, they have never played together before. They were ready to share a new personal experience, intimate, an experience that would not necessarily lead them to a specific place (except that they both would increase their personal backgrounds). And this is a lot, enough for a first meeting). Before they had spoken about wine (100% “Tempranillo”) and about many other things. Afterwards, the chain of surprises ran at a very high speed. The result of it is this record. When listening to it for the first time it is clear that magic was born in that moment and that a positive synergy, step by step, was self stimulating until it exploded in thousand of colours. A volcanic synergy able to create a new world when its lava cooled. And, how to define this record? Jazz? Contemporary music? Improvised music? New music?… Impossible to be labelled. Impossible or unnecessary. Then… why not saying music by Fernández and Parker? Or, still better, why not… simply music?
Parker and Fernández met a few months before they recorded this record at “La Filature” in the french town of Mulhouse. Fernández played before (solo). Parker performed after (with Daunik Lazro and Joe McPhee), and by shaking their hands it was sure one day new doors would open. And they opened wide when in the 2nd Festival of the XX Century Music of Barcelona Fernández shared the stage with the pianist Marilyn Crispell (a duo to be kept in mind) and, the day after Parker offered one of his dense and astonishing saxophone solos (another concert to be kept in mind). Why two days after their second meeting they decided to go together to a studio in order to record something? There’s no answer, it simply had to happen, since it was written somewhere.
Without any scores or pre-established ideas, only with the will of sharing an instant, music was flowing and finding its shape and it created its own horizon.
And fortunately the tape recorder was there in order to record that first encounter.